Why I Love Victorinox as a Brand

I have been using Victorinox Swiss Army Knives for many years and can attest to their quality and durability. That pretty much sums up my entire stance.

The makers of the original Swiss Army Knife as they are called on Reddit…yes, I trust Reddit more than I trust any marketing team’s copy on a brand’s website…have a devoted following. I just happen to be one of them.

Why is Victorinox Such a Trusted Brand?

My partner is a devoted fan of the brand because he loves how reliable his first knife still is to this day. He’s owned the same basic (yet versatile) knife since he was a kid. It still looks great and performs admirably after decades. That’s saying something.

So if I had to summarize this: their products last a long time and are high quality. When you invest in a Victorinox product, you know you are going to keep it for years. I can attest to this because we have quite the collection at home.

My Sleek Little Carry-on Luggage is From There.

So far, it’s the only luggage that has survived a 6 months trip through Europe.

It’s so good that we’ve had people ask us about it. And we gladly tell them all about the luggage in nerdy detail…before breaking out the laptop bag to show that it goes beyond the carry-on.

I’m on my second generation bag. We gave away the first one because I wanted a newer model. My friend is very happy with my first generation though. Their bags are just smart. Need easy access to stuff? They’ve got you. You need to secure the stuff that you have easy access to? Done. Everything just makes sense on the bag. It’s all been carefully thought out. No flash, just substance.

I have a friend that also enjoys luggage and backpacks that are sleek and functional. We nerd out over these things. She’s also a convert. When we travel together, it’s weird because we have the same backpack. The only clue as to which bag is which resides in a Mac vs PC divide between us.

I love my Swiss Army Knives. It’s a tradition for us: whenever we go to Switzerland, we buy one. Is it expensive? Of course it is! Is it worth it? You bet it is. The brand manages to do something most other brands do not do: strike a good balance between loyalty and quality. With new limited editions coming out regularly, you are bound to always find a new knife to take home. It doesn’t mean you love your older models less, just that you are adding one to the family.

Let me tell you about the *special* editions that we have at home. They are all kinds of awesome.

This is the super goth Swiss army knife option. Everything is black: the plates, the blades, the accessories. The only light thing…is literally the light that it comes with. A light sounds like a bad idea (at least it did to me) but it’s been incredibly useful for us! It helps find things that have been dropped under the couch for example.

This is the quintessential Swiss experience for me: a Swiss Army knife with a set of chocolate plates. Still partially wrapped in aluminum foil too! I have many good travel memories with this knife. And when you go in the stores, you often can discuss knife models with the people who work there. They know this one quite well.

This is my baby. This Swiss Army knife I upturned the Vienna store for. I broke the scissors in it and went to get them replaced. This is where I learned that this decade old design was one of the winning designs of the contest the brand ran. 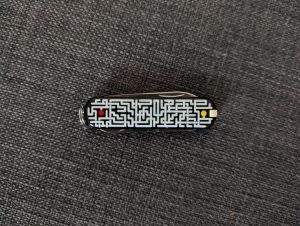 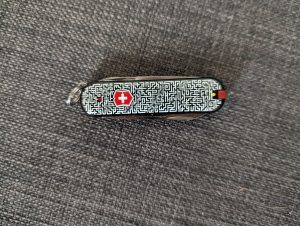 Getting my Swiss-Amy Knife Repaired

To repair my damaged knife, it had to be sent back to Switzerland. I didn’t know this as we previously got a knife repaired at the Zurich airport store. I thought I would just waltz in, wait 15 minutes and be done with the whole thing.

Instead, my knife went off to Switzerland to get repaired.I had to travel back to Vienna (I was back in Canada so we had to wait until I had a good reason to come back a few weeks later). The problem? It came back with a broken labyrinth plate.

The company told me they couldn’t locate a replacement plate as it is a decade old design. I wished I had been informed of this as I would have much preferred keeping the plates intact with broken scissors than the opposite.

I was so heartbroken.

And then, a few weeks later, the Victorinox Austria folks emailed me out of the blue telling me the Swiss team had found replacement plates! It was so unexpected and awesome. I was super thankful. I can’t believe they kept trying to find a solution when I’d already given up.

A few weeks later, I was back in Vienna again to drop the knife off for a second round of repairs.

By the way, the cost of fixing the knife is incredibly low. I don’t know another brand that will handle repairing a decade old product, not once, but twice! It’s absolutely awesome. One day, I got an email with “!!! THE KNIFE IS BACK FROM SWITZERLAND !!!” in the object. It was incredible to feel like we were all excited about this happy ending. Now, I have my collector model in my bag, perfect as ever.