Ever since the Google Penguin algorithm update, Negative SEO has been a fun little way to get ahead of the competition. If you don’t know what I’m talking about, Penguin is a tweak in Google’s ranking algorithm that examines the quality of the links pointing to a website.

It’s a weird feeling for me because I’ve done countless link audits for some clients claiming to have been hit by negative SEO. Never came across a blatant case of Negative SEO until I met a woman so disappointed in her Caesar salad that she was willing to talk about web traffic.

Why the long face? Because the salad was disappointing. And maybe because her blog had taken a hit. I thought I had experienced a wide range of reactions for calling out bullshit. Turns out Negative SEO is one of the fall-outs I had not anticipated.

Ready for a good crunchy story?

Let’s start with the beginning. Never ever order a salad in a Montréal steakhouse. You will be disappointed like Stéphanie Walter was.

Now that the scene is set, here is some context.

Arm yourself with some popcorn if you want to read the real story on her badass design blog.

Here is a visual illustration of the fallout:

A quick and dirty blueprint on how to detect NSEO

So how do you get started on detecting negative SEO? Well, it shouldn’t take you long if the work is done shoddily as it often is.

Oftentimes, you’ll find someone that can help point you in the right direction. That direction may be friends, blog posts or a digital agency. Bottom line is: you may have a problem, seek the solution! In the case I’m writing about, all it took was a set of eyeballs and the right tools.

Step 3: Take out computer, go to Majestic.com and validate your site with the Google Search Console

Majestic lets you create a free report for any website you own. You prove that you own it through the Search Console. Don’t have one? You can set it up very fast thanks to Google.

Head on over to the basic overview, locate the anchor tag. Some people like to start with the link profile. That’s great but if you suspect something fishy, you’ll see it in the anchors. Why? because spam has a way with words.

I saw some funky anchors right away. Things like subaru, rolex, adapters don’t really belong on the top link anchors for a UX and web design website. So, here’s what the final tag cloud looked like:

and if you look closer you will see these guys:

Step 4: clean that shit up (aka disavow)

You can find all the information in Google’s documentation. You basically create a file listing all the dirty dirty things that have been done to your website, upload it into your Google Search Console and wait.

Want a complete guide on how to go about that? Moz has you covered.

This is what it should look like in your inbox if the disavow is successful: 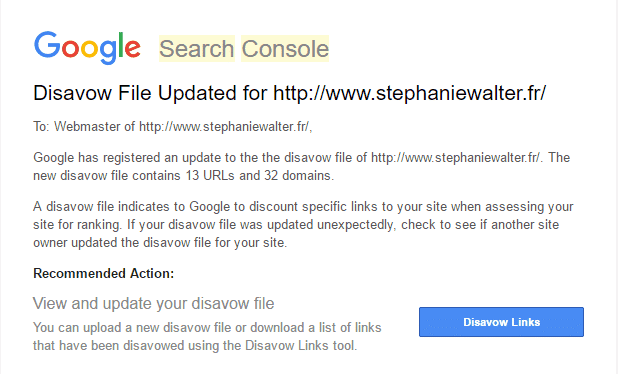 Let’s not get hasty and point the finger at the potential perpetrators.
“Correlation does not imply causation“. Remember that phrase? Correlation between two variables does not imply that one causes the other.

Who, what, when, where, why